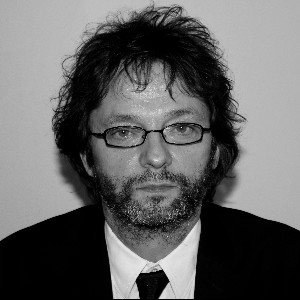 Kjartan Ólafsson (1958) graduated in 1984 from the Reykjavík College of Music with a Bachelor of Music degree in composition. He continued his studies in Utrecht in Holland, at the Institute of Sonology, where he concentrated on electronic music, and later at the Sibelius Academy in Finland where his composition teachers were Einojuhani Rautavaara and Paavo Heininen. Kjartan received his Licentiate of Music diploma (PhD) from the Sibelius Academy in 1995.

Since 1988 Kjartan has developed a composing system based on Artificial Intelligence technique called CALMUS (Calculated Music), which is a computer program especially designed for composition of contemporary music.

Among works composed by Kjartan are pieces for solo instruments, chamber ensembles, electronic music, choir and vocal pieces, multimedia works, orchestral works, concertos and music for various theatre productions and short films. The Viola concerto received the Icelandic Music Award in 2002 as the best composition of the year.

Some of his music has been released on CD.

Since 1988 Kjartan has given numerous lectures on algorithms and Artificial Intelligence in musical composition at such venues as the Sibelius Academy in Finland, ICMC International Computer Music Festival, EMS – Electro-Acoustic Music institute in Sweden, The Norwegian Academy of Music, New York University, Instituto Quazar and Conservatorio Santa Cecilia in Rome and the University of Iceland.

Kjartan Ólafsson currently works as a composer, teacher, producer of contemporary music festivals in Iceland ErkiTíð and Dark Music Days, and as a researcher and developer of CALMUS. He is the currently the president of the ISCM - Icelandic Section and chair of the Society of Icelandic Composers.

In 2005 he was appointed professor of composition and theory at the Iceland Academy of the Arts.