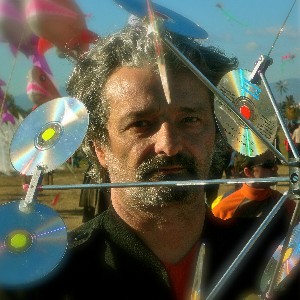 Born in Paris in 1958, Frederick Rousseau belongs to the generation that witnessed the beginning of electronic music and the explosion of technologic applications to the entertainment world.

In 1980, he meets Francis Mandin, a young enthusiastic electronic fan, who convinces him to join in the creation of Music Land, a music store in Paris and a laboratory of futuristic electronic instruments.

In 1981, after working on the finalization of the first polyphonic sequenser by MDB, he meets Jean-Michel Jarre, who is looking for a musical programmor capable of manipulating this instrument for his China Tour. This unforgettable experience marks a turn in his carreer. Back to Paris, the adventure continues as he takes part in the recording of the live album « Concerts en Chine ».

Later during this memorable year, he meets Vangelis who is recording in Paris « Friends of Mr Cairo » at Studio Davout.

The following year, Fred is called back to London by Vangelis for the recording of the music score of « Blade Runner » by Ridley Scott. It is the prelude of a complementary work relation that will last for over 20 years.

Back to Paris, in 1984, he will lend his energy and creativity to Jean-Michel Jarre’s « ZOOLOOK » that he will noticeably mark with his imprint.

In 1990, Jean-Michel Jarre uses Frederick again to rewrite all the intros of the music for La Défense Concert. This concert will enter the Guiness book of records as the largest audience ever (2 500 000 people).

The year after, 1991, Vangelis moves to Paris and records the album « City » at Studio Mega. Frederick will follow the greek composer to Holland for « Eureka », the european community project initiated by François Mitterand on the theme of Industry and Transport. This imposing concert takes place on the Rotterdam docks of the industrial port and gathers 800 000 people. The Show is transmitted by satellite to all european countries.

After this in 1992, Vangelis convinces Frederick to leave Studio Mega in order to create Astron Studio in Neuilly and definitely seal their artistic collaboration. They consecutively record the music scores of « La Peste » by Luis Puenzo, « Lunes de Fiel » by Roman Polanski, and « 1492, Conquest of Paradise » by Ridley Scott.

In spite of a very busy planning, Frederick Rousseau has always found time to work on his own compositions and he releases in 1994 « MÖ », an album marked by its originality and its asian inspiration. This music opens the way to what will be refered to as Ethno-Lounge music.

Following ,« Sprit in the Woods »(1995), then « Abyss » (1996) , a concept that Frederick refers to as « no music », an experience realised with neurologists specialised in musicotheraphy. In 1997, he releases « Woods »,
Again, in 1997, Fred will join Vangelis in Athens for the opening ceremony of the world championship of athletics. The show is presented in the antique stadium of Panathanaikos to 75 000 people and transmitted by satellite to an audience of 820 000 000 throughout the world.

Meanwhile, Frederick composes the soundtracks for 40 ethno-zoological documentary films and releases in 1999 the collection of 5 albums « Terres de Légendes ».

Vangelis’ project « Mythodea » initiated in 1993, is finalized in 2001. Frederick coordinates the electro-orchestral show starring Jessye Norman and Kathleen Battle and performed by the London Metropolitan Orchestra, directed by Blake Neely. This music was chosen by NASA for the 2001 mission : « Mars Odyssey ».

2004 is marked by Oliver’s Stone « Alexander » of which Vangelis composes the soundtrack and by which Frederick adds a new string to his bow : musical supervisor. This massive project lasts over a year and represents an exceptional experience and a monumental work.

In 2005, Frederick Rousseau signs with Milan-Universal and comes back with a very personnal album : « Tears » which foretells a new turn in his artistic carreer.

In 2007, he works on El grecco movie with Vangelis and Join in 2008 Ircam the institute of reseach in Paris. This new approach offer to Frederick Rousseau an opportunity to design the future of electronic instruments.

In 2010 He created the collection IRCAM TOOLS and IRCAMAX for Musicians and sound designers and gived to music industrie an acces to ircam technologies.

In 2012, we works with Vangelis on « ORPHEDEA » a outdoor concert in DOHA for the opening of KATARA ( cultural center ) a CD and a DVD will be released in 2015.