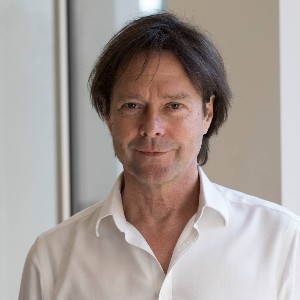 Is a former head chorister of Chichester Cathedral and music scholar at Lancing College.

Briefly in Buggles with Trevor Horn (Adventures in Modern Recording Album), Simon co-wrote several hits produced by Trevor, including ‘Give Me Back My Heart’ and ‘Videotheque’ for Dollar and the million selling ‘Slave To The Rhythm’ by Grace Jones. He has written for many including Toyah, Cliff Richard, Shirley Bassey, Elkie Brooks, Martine McCutcheon and Carol Decker (T'Pau).

He has arranged and played for, among others, Musical Youth (Pass the Dutchie), Wham, Divinyls, Bucks Fizz and Right Said Fred.

Simon has performed on numerous TV shows, including TOTP with Don Henley and, as an artist, recorded two albums for Magnet Records.

He has composed over 150 TV theme tunes including Five Sport, BBC Outtake TV, the Shanghai TV News, Hole in the Wall (BBC1), Going for Gold (Five) idents for BBC Global TV, The Premier League anthem and Sports day for the BBC news channel.

He co-wrote and produced the new Toyah Willcox album ‘In the Court of The Crimson Queen’, (recently number 2 in the Amazon album chart) and is writing the music for the latest Chris Tarrant Extreme railways series and UTV a new Iraqi TV channel.

As a working composer and songwriter, Simon is aware of the many concerns that affect us in the digital age, not least the gradual erosion of the value of copyright that is a threat to both writers and publishers.

Simon is Deputy Chairman (Writer) of PRS for music a member of the Executive Board and served as Chairman of BASCA (now The Ivors Academy) from 2013 to 2015.

He is a former vice President of CIAM (International council of authors of music) and is an ambassador for the PRS for Music Foundation.