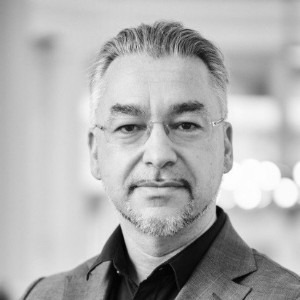 Alfons Karabuda is a Swedish composer born in Stockholm in 1967. Composing mainly film and theatre music, he has worked with BBC, Zentropa, DR, SVT, The Swedish Film Institute, Dansens Hus and Stockholm City Theatre. Mr. Karabuda currently holds the position as chairman of SKAP (Swedish Society of Songwriters, Composers and Authors), president of ECSA (European Composer and Songwriter Alliance) as well as a member of the board of STIM (Swedish Performing Rights Society). In addition to this, he is president of the Polar Music Prize Award Jury and chairman of the Polar Music Prize Award Prize Committee. Mr. Karabuda currently is executive vice-president of the International Music Council.

Over the years Mr. Karabuda has collaborated with different international organizations, among others, Music Creators North America (MCNA) and the Songwriters Guild of America (SGA). In 2012, Mr. Karabuda assisted in the establishment of MCNA. As ECSA President he has contributed to the International Council of Creators of Music (CIAM), the Pan-African Composers and Songwriters Alliance (PACSA) and The Alliance of Latin American Creators of Music (ALCAM). Since September 2019, he is the President of the International Music Council.