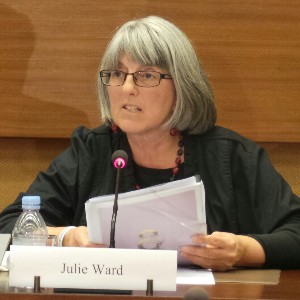 She serves on the Parliament's Culture & Education Committee, the Regional Development Committee and the Committee on Gender Equality and Women's Rights.

MEP Ward is an active campaigner for equal rights and social justice, most recently organising local events for One Billion Rising, the global movement to raise awareness of violence against women and girls.

First elected in May 2014, Julie previously had a long career in the cultural sector. Prior to being elected as an MEP, Julie had been working with partners in the EU and beyond for more than a decade. For instance, she was recently involved in an international delegation to Belfast to participate in an all-party discussion about the role of the arts in peace-building processes.

She decided to go to university for the first time in 2009 and enrolled on a Masters’ course at Newcastle, studying Education and International Development. This meant learning about economics, human rights and poverty. She graduated in 2012 determined to use her new-found knowledge for the greater good.

Ward has extensive experience of front-line grassroots work, engaging with people from all walks of life as they try to do their best for their families and their communities often in very challenging circumstances.