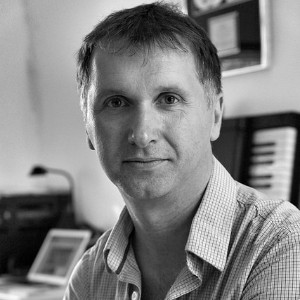 Michael Price is one of the UK’s most sought after composers. His work for film and television has been widely recognised, winning an EMMY award in 2014, and Royal Television Society, Music&Sound, and Televisual Bulldog awards as well as a BAFTA nomination and 2 further EMMY nominations for the critically acclaimed BBC series Sherlock, which he scores with David Arnold.

Michael has also composed for a number of feature films including Another Me, Inbetweeners 2, The Inbetweeners Movie, Delicious, A Fantastic Fear of Everything, Horrid Henry: The Movie, Cheerful Weather for the Wedding, Wild Target, Wild Child and The Mountain Within. Other TV work includes the ITV series Lightfields and the 12-part award-winning documentary series Beyond the Search.

Prior to achieving acclaim as a composer himself, Michael enjoyed significant achievements as a music editor on a number of critically acclaimed films such as Peter Jackson’s The Lord of the Rings trilogy, Richard Curtis’ Love Actually, Bridget Jones: The Edge of Reason and Alfonso Cuaron’s Children of Men. As a music editor, Michael has been nominated for 4 MPSE Golden Reel Awards, winning in 2001 for The Lord of the Rings: The Fellowship of the Ring.

Michael’s first film experience was as musical assistant, co-producer and arranger to the late Michael Kamen, with whom he collaborated for 5 years. During this time Michael worked on a number of exciting projects including X-Men, Band of Brothers, The Iron Giant, Metallica – S&M, and live concerts around the world. Michael has also arranged or written additional music on a number of major film projects, including Edgar Wright’s Hot Fuzz, Tinker, Tailor, Soldier, Spy, Casino Royale and Quantum of Solace.